The source code for the tutorials can be found on GitHub.

The goal of this project is to drive a SSD1306 based 128x64 OLED display, using the Adafruit FeatherM0.

For readers of the 07 SSD1306 FeatherWing_OLED tutorial a lot of things will look familiar.

The difference is, that this tutorial will not hide the SSD1306 driver details, but will use this driver directly, to show a more vendor independent solution. 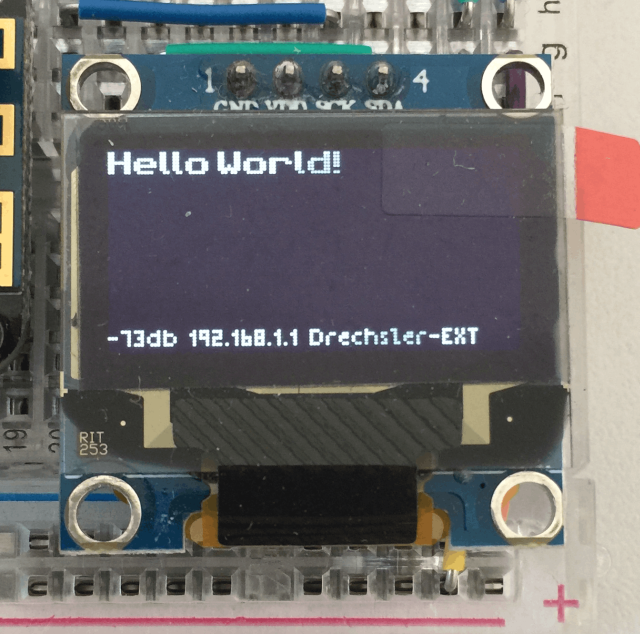 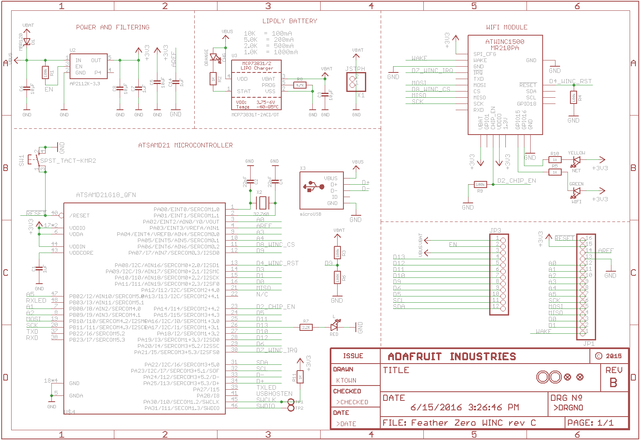 The connection between the MCU and the SSD1306 display driver IC are shown in the following table:

While the SSD1306 datasheet shows that the chip supports a couple of other interfaces beside I2C, including SPI, only the I2C interface is connected on the OLED module.

This unfortunately means, that we can not use the SSD1306 OLED component found in the Atmel Software Foundation (ASF), because this one seems to be hard-wired to SPI. So we have to write our own driver for the SS1306 based OLED displays.

Add a new ASF Skeleton Project for the 08_I2C_SSD1306_64_lines_OLED tutorial to the existing solution.

See my Step-By-Step tutorial if you are not sure how to do this.

To make sure AtmelStudio always compiles and runs the 08_I2C_SSD1306_64_lines_OLED project we make it the StartUp Project.

The next step is to import the ASF modules needed for the specific project.

or use the ASF Wizard entry in 07_I2C_SSD1306_FeatherWing_OLED's context menu.

You should see two lists:

In Selected Modules we already see:

This is the standard framework needed for any ASF application.

This is the driver for the SAM SERCOM I2C module in Master Mode. It provides a unified interface for the configuration and management of the SERCOM module in I2C mode.

This is our communication interface to the SSD1306 on the FeatherWing OLED.

And Add>> this module to the project.

This is the common standard serial I/O management driver that implements a stdio serial interface on SAM devices.

While this driver is strictly speaking not necessary for the project, it provides the printf() function for printing to the serial terminal, making printing messages more convenient.

This driver also includes the

So there is no need to import it as stand alone module.

Now press Apply. This will add all the necessary ASF code to our project.

For this project we need to:

See my Step-By-Step tutorial if you are unsure how to do this.

In the Solution Explorer find the generated main.c. 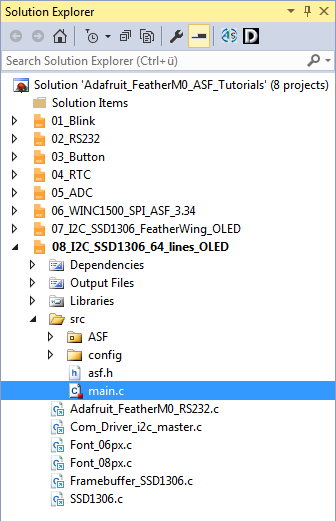 As usual, after some file level comments, we start by referencing the include files used.

All we need to import to get the whole ASF magic working is the asf.h, that was generated by the ASF wizard. The entry should already be there. The wizard took care of that for us (line 35).

The rest of the lines 36..42 include the files as described in the previous section.

To better understand how the application works, we will start the explanation of the code with the main() function in lines 179..244.

However, there are a couple of things on top of main(), that are worth noting and that we will come back to in detail later:

The main() function itself starts by defining a couple of variables: 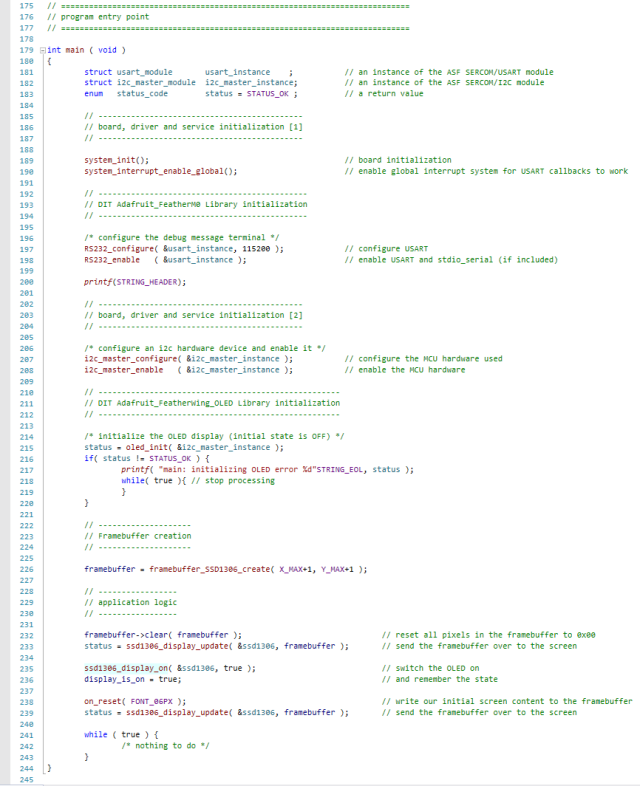 Up to now, the code is pretty much known from the previous tutorials.

Now we start setting up the I2C subsystem:

After a successful initialization of the I2C subsystem we bring up the OLED:

With the setup done, we can now start using the OLED in our application's logic.

The first step is to clear the screen of the OLED:

Line 239 transfers the this content from the internal framebuffer to the FeatherWing OLED display.

There is nothing left to do for the main application loop in lines 241..243.

This function configures SERCOM3 as an I2C master and the pins, the FeatherWing OLED SSD1306 is connected to as the I2C bus to use.

It doesn't seem to make much of a difference if you user SERCOM3 or SERCOM5, so I used the first on the list. 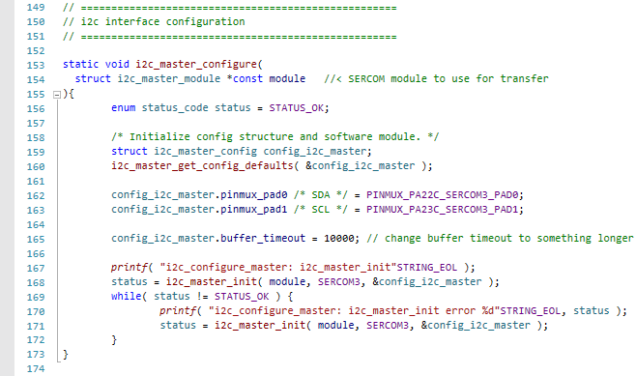 This function initializes the OLED display, by

This function is called by main() in line 238, right after the initialization is done and before the control is handed over to the event handlers.

Since I'm not using a mono-spaced (all characters have the same width), but a proportional-spaced font (every character has an individual width), the ultimate width of a string on the screen not only depends on the number of characters in the string, but also on which characters appear how often in the string.

To be able to position any following string on the screen correctly, without going through some extra calculations, the *_draw_string() functions of the font libraries I use (Font_06px, Font_08px), return the accumulated width of the string drawn in every call.

Even so not used in this tutorial, we still need to pass a variable that receives this value to the functions calls.
This variable is defined in line 104.

Line 105 defines a variable for the x position to draw the test-strings to.
The way the code looks now, we could have used a constant, but if you want to experiment and write two or more strings in a line, you need a variable x position.

on_reset() is capable of drawing two different test screens, depending on the rsc parameter.
The valid values for this parameter are defined in the resetscreen_content enumeration in line 93..96.

The 6px height font was as small as I could get it. If you can get it smaller and still readable, mail me!