Yesterday the 3D print of my ElectronicTOH CAD design arrived from Shapeways. 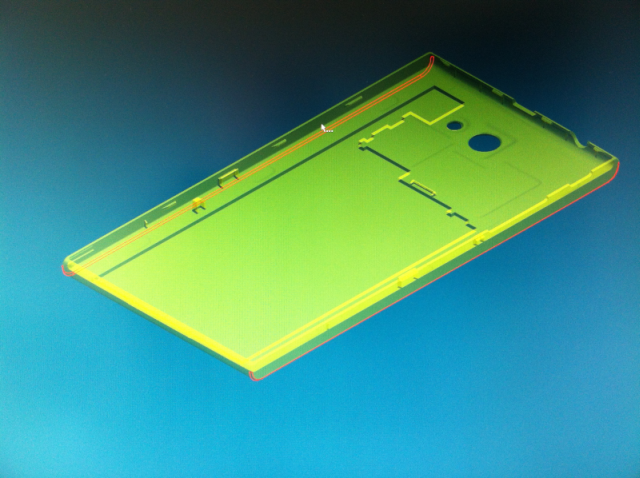 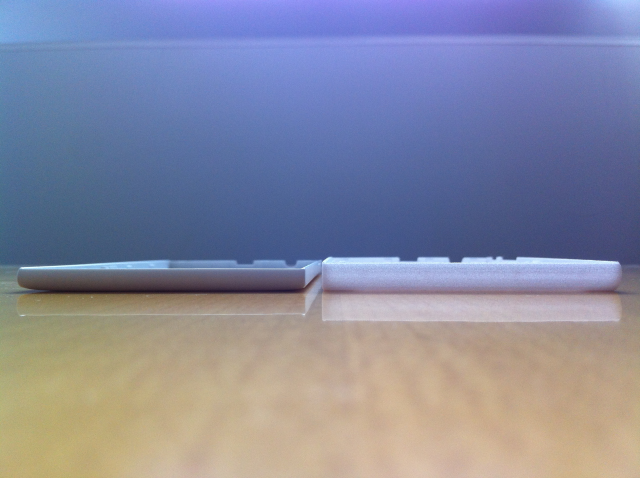 I added about 1mm to the thickness of the original TOH, to make room for some electronics... 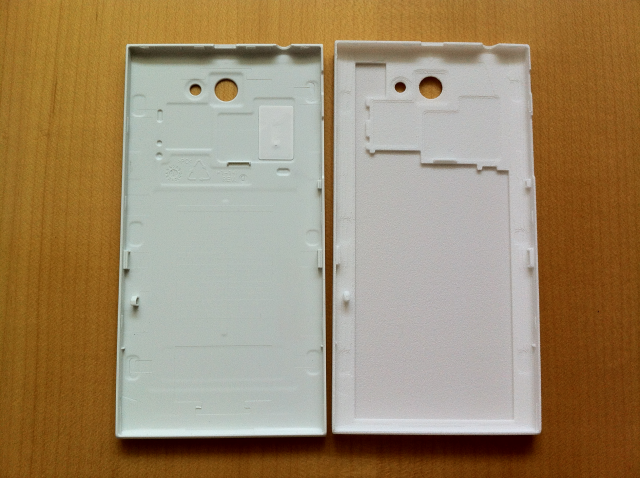 ... and cut out as much space as possible.

Comparing the original TOH with the ElectronicTOH we see, that the new one does not add to much to the phone's thickness, even so I decided against rounding the sides and kept the bottom flat.

There is plenty of space for the TDK Qi receiver.

... and closing the phone is shows no problems.

The wall of the new electronic compartment is thin enough to be translucent.That allows us to see, that the Qi receiver is positioned nicely in the middle of the phone.

Unfortunately printing the white ElectronicTOH, Shapeways tolerances have not been on my side this time. While the electronic fits nicely, without buckling the TOH, the left lower corner sits a little loose for my taste.

Fortunately I also had a black ElectronicTOH printed, that fits a little better. 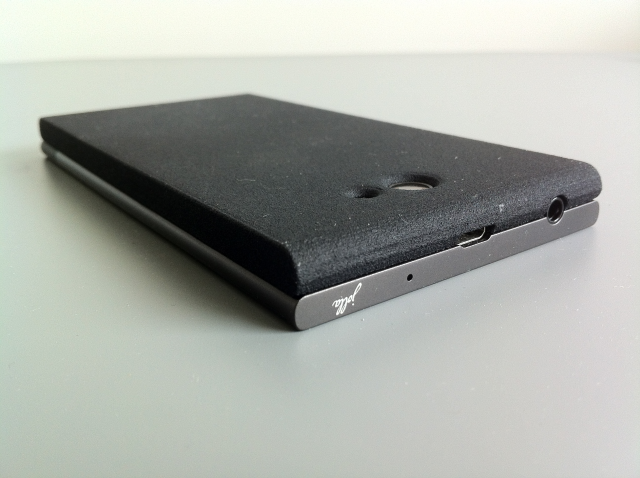 ElectronicTOH is designed for as much space as possible. But the TDK Qi receiver module does not need all of it. So I decided to make a mat for a propper fit.

I printed a 2D sketch from the 3D CAD model and cut out the electronic compartment part.

That one I used to cut the mat from some plastic I salvaged from an old milk bottle, that was of the right material and had the right dimensions. 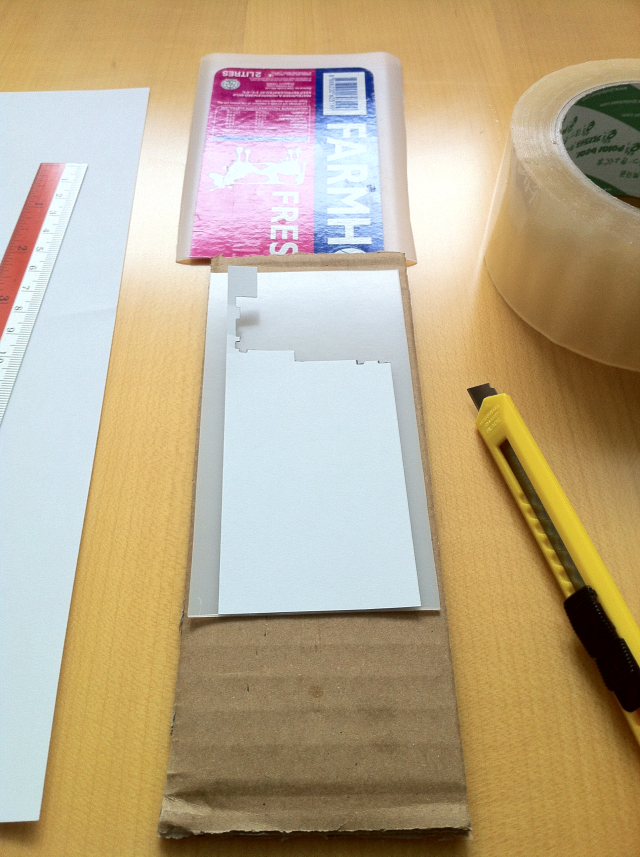 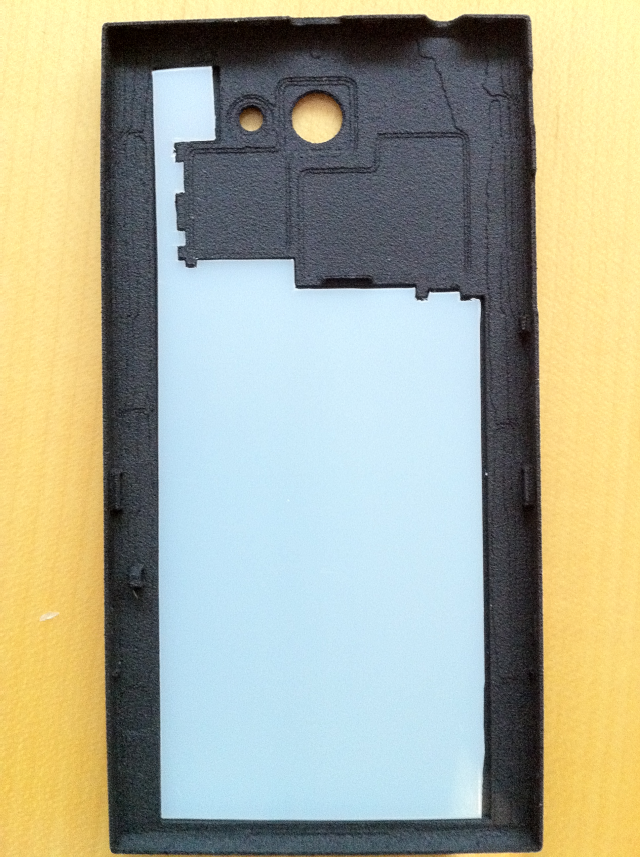 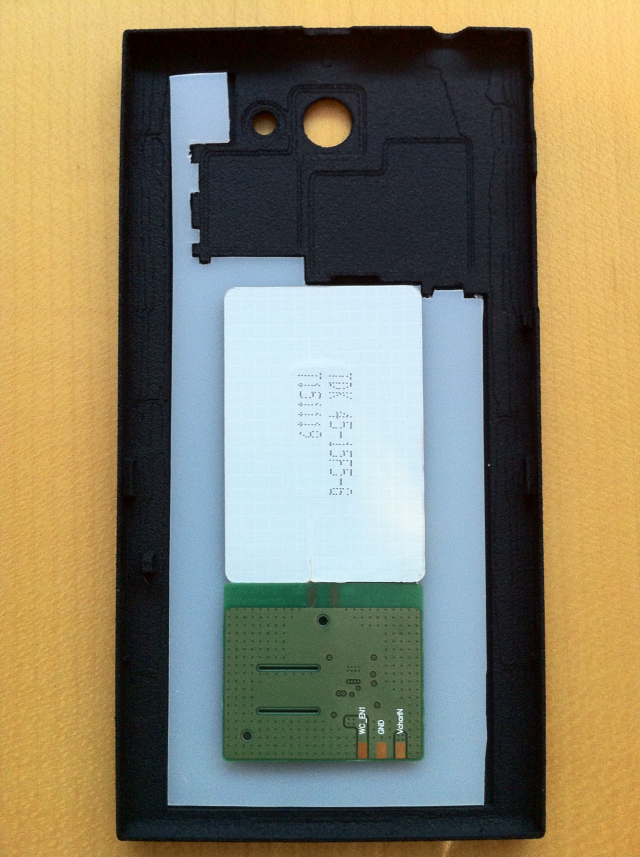 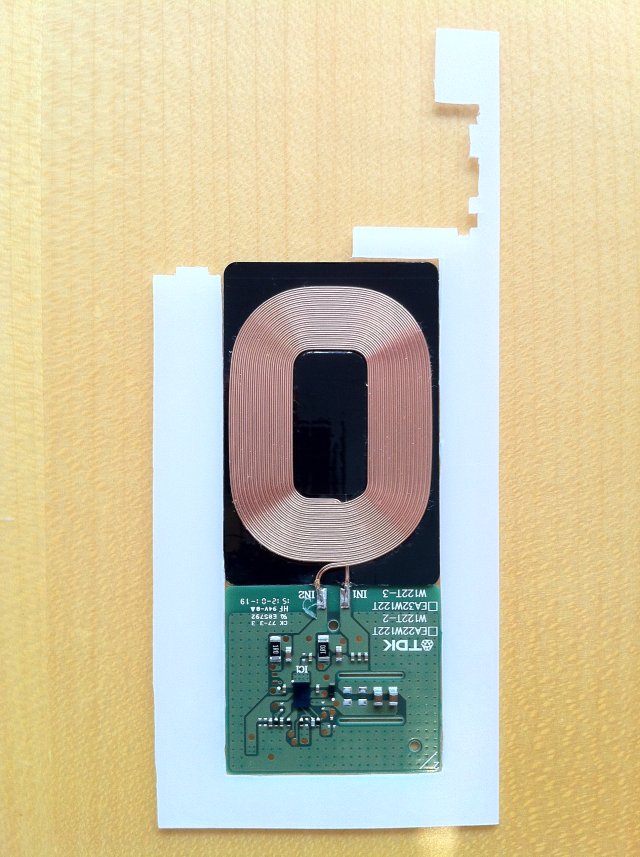 ...and is not moving out of position, even if shaked well. 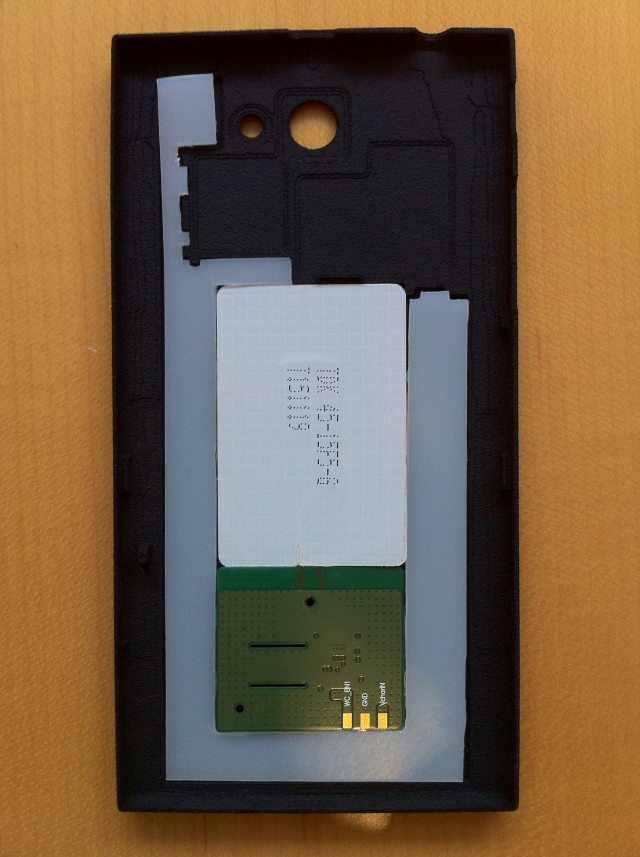 All thats left is the electrical connection from the receiver to Jolla's power input pins.

From The Other Half Technical Specification we know:

On the TDK receiver the contacts are the other way around, wich suits us just fine. 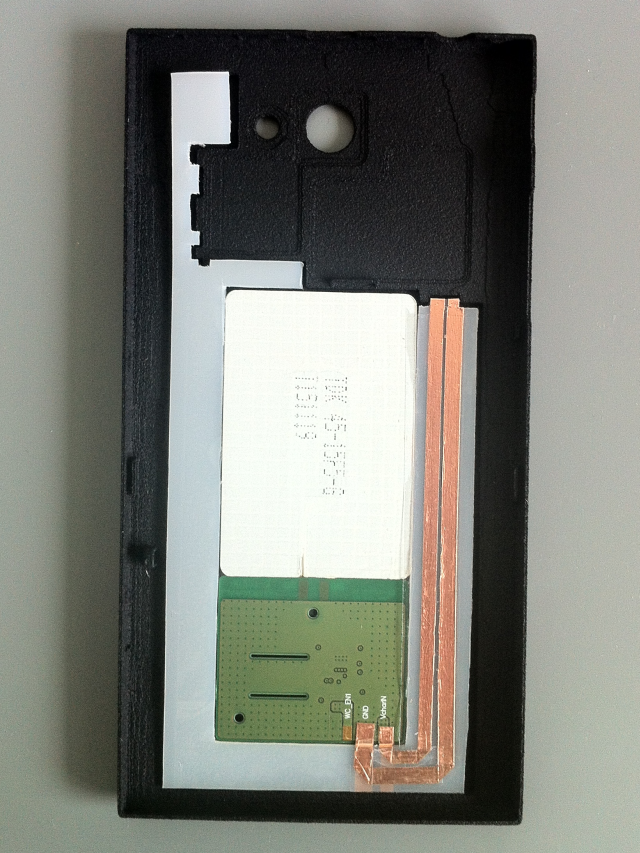 For this proof of concept a custom made PCB would be overkill, so I crafted one myself using 5mm copper tape.

Since soldering on plastic did not seem such a smart idea, I first tried if the board would work without it.

Unfortunately it doesn't. Loading starts, but then breaks down immediately.

Assuming that the reason might be the voltage drop at the contacts, caused by a to high contact resistance, I took the risk and soldered all contact points (being prepared to mess up the whole thing and having to start from scratch). 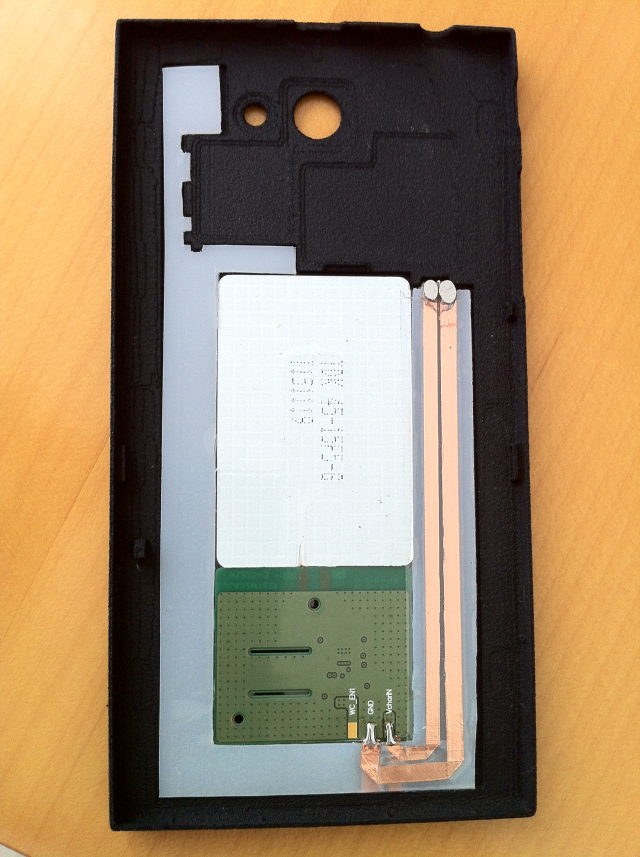 But I managed. Either the materials are tougher than they look or I was quick enough with the iron or plain lucky, it worked better than expected.

Unfortunately, that did not solve the problem.

First I switched back from the TDK transmitter to the IDT transmitter, because it had shown to have a slightly better efficiency. 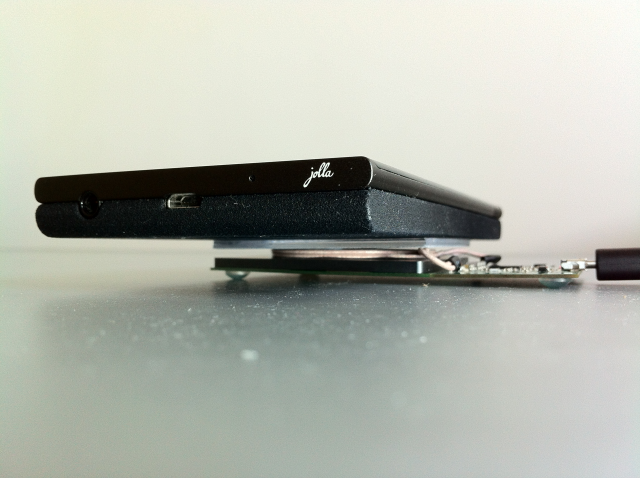 That improved the situation a little. But the alignmet was very delicate. Nothing like that drop and forget experience you would expect.

Using a made up kick stand improved that situation a bit further. 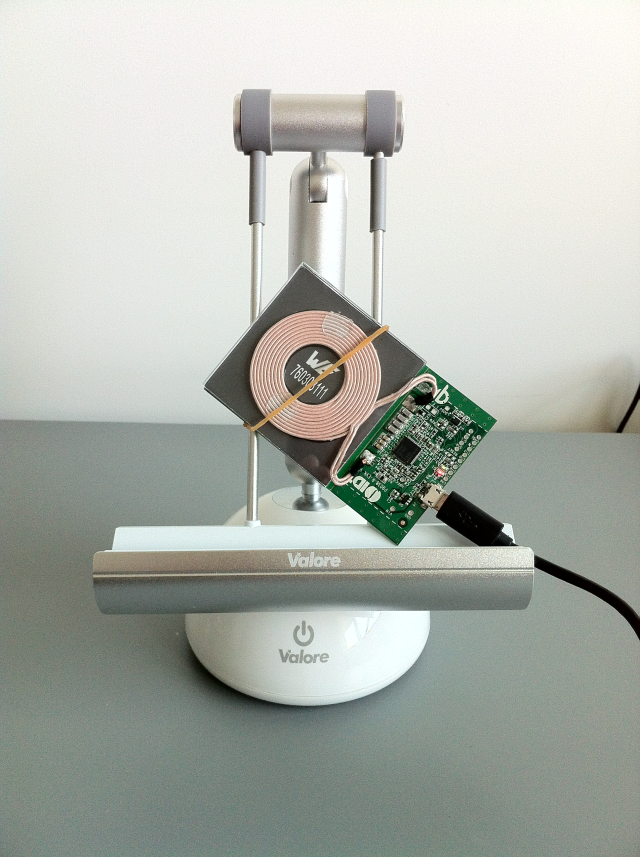 But was still far from satisfying.

In my early experiments with the IDT and the Adafruit receivers I had quite a significant voltage drop and found that the Jolla power supply is more on the week side of the 5V 1A specification.

Also considering, that these wireless charging systems have an efficiency factor of only about 0.7, if the power supply was designed for cable use, that might create a problem.

So I tried to change the USB power supply, to see if that helps. 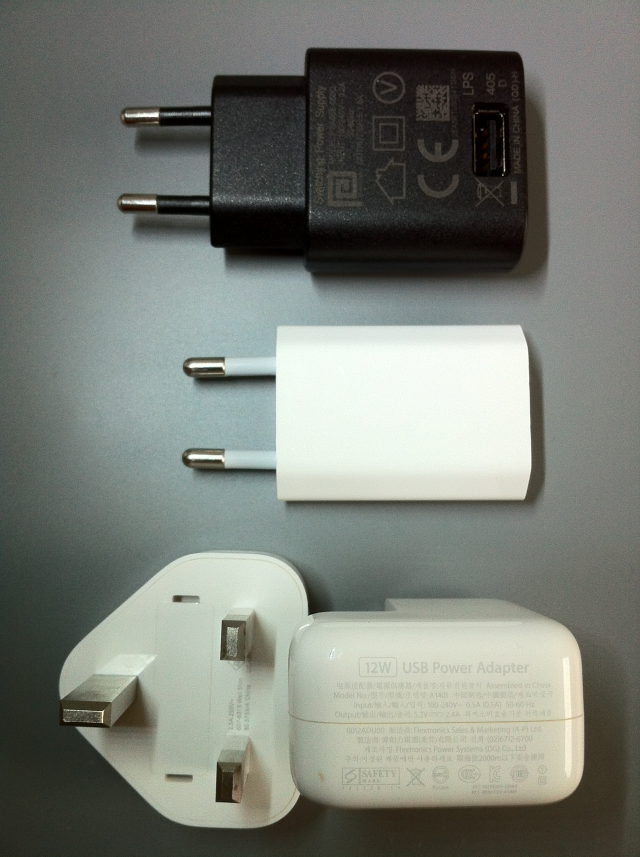 First I used the one of an old iPhone 4S I have still around. While that one has the same specification as the Jolla power supply (5V 1A), it was finally able to charge the phone, as long as it was switched off. But if you wwitch it on the charging dies :-|

So, clearly what is needed is "More Power" (©Tim Taylor, Home Improvement).

Not sure where that one comes from (there use to be an iPad in the house, maybe that's the source) - Anyway, the most powerful USB charger I have around has 12W (instead of the usual 5W) and is specified with 5.2V and 2.4A.

That is right on the upper limit for the TDK transmitter, but still within the specification.

The QiTOH is finally loading the Jolla without being over sensitive to the position or the distance.